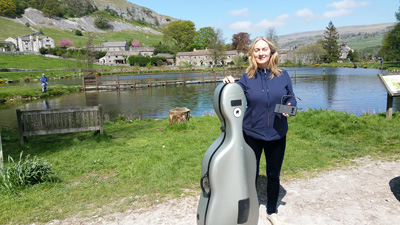 Usually, when traveling, during your first day time is moving slowly, on second one – a bit faster, third - things acquire normal speed. Such was not at all the case with me last May in England. From the very first day and on through the end of the tour it seemed as though all the events had themselves lined up waiting to be shot out in a quick sequence one right after the other.

Shock #1: Manchester- Caperby roller-coaster ride made me quickly remember a couple of olden prayers. As we got closer to our destination the ride began to feel rather like a bob sleigh one, with an added challenge of vehicles moving in opposite direction on a one lane road blindly fenced up on both sides. Prayers were futile, but there were moments when I thought: well.. if I go now, at least it will happen in one of the most gorgeous valleys I have ever seen in my life.

Shock #2: turns out that my bow got loose inside the cello case during my dragging it through three airports. On day 2, a trip was in order to see the cello doctor, who would camouflage an unattractive pale patch, which the front of the cello was now boasting. The location of the cello doctor’ shop was not far from the lovely Carol and Liz cottage, where I was now staying.

Nevertheless, during our ride there, I felt like a Baroque Era musician: Carol drove her Peugeot meticulously, still, it felt like being in a horse carriage, having to pass one valley after another, and move over one hill towards a new one. In front of us was the unchangeable one lane road, limestone cottages, and limestone fences, my eyes were bathing in all the imaginable and unimaginable shades of green, from cool cobalt to rich cadmium and beyond, no trace of industrial progress – this all contributed to the sensation. 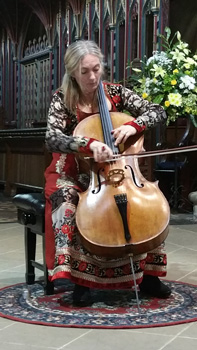 Shock #3: 10 minutes before going on stage to perform my 1st concert at Aysgarth Church: one of the Wittner pegs on my cello decides that it had enough of the abuse and it’s time to pay back the abuser. While its desire for revenge is perfectly understandable – Kodàly, Bach No.5, as well as my own Sufi Suite are all scordatura pieces, which means that this poor thing was being turned up or down multiple times a day for the past couple of months. Still, to select such a solemn moment for a sweeter revenge was a shameless betrayal. So I thought the day after the concert. But then, ten minutes before its start, I did not have time to think. To act was the only thing I had time for: Carol was the designated savior of the evening, sacrificing her baby cello “Marci” for the ritual I was to conduct. I had spared Marci the Kodàly Sonata. She had already had done enough for the evening: Bach’ Chaconne, Anisimova’ Sufi Suite, Marais’ la Folia, Bach’ Fifth Suite, and improvisations, and encores. I was deeply touched by how well Marci behaved under the stress, how lovely she sounded, considering the fact that we only had just met. Meanwhile, my cello’ peg was feeling ashamed of itself, I am positive.

Shock #4: English audience is a VERY QUIET one. Not to be confused with DISENGAGED or COLD. On contrary, that audience can really focus and they do not need to cajole themselves to appreciate music by sighing, fidgeting, not to mention snoring or cell phone beeping. They simply sit quietly and listen. Afterwards, one understands the depth of their involvement with the music through their comments and questions.

People of England mean what they say and say what they mean, AND they manage to do it without the use of words-parasites. To the U.S. resident of almost three decades, that was perhaps a minor shock, but its aftershocks are still occurring.

Shock #5: while in England, think twice before using words “fanny” and “pissed off”. Might run into a problem. 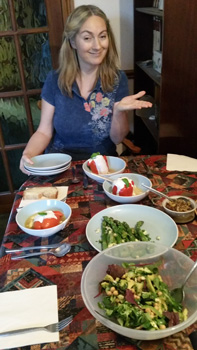 While staying with Carol and Liz I felt just like another member of the family. Their hospitality was very natural. Oh, you like to wash dishes? Let us not stop you! Want to cook, which ingredients shall you need to prepare dinner? Let’s watch Faulty Towers. So what that Tanya barely catches 50% of the fun.

You may wonder, but I liked that approach very much and found it quite relaxing!

During the first week, in spite of spending time on cello issues, we managed to walk the magnificent hills of Wensleydale, breath in its cold air, which smelled of sheep and cows and take a ride to see a beautiful lake, which shone as a gemstone from a distance, adorned by the deep greens of the valley’s slopes.

And last but not the least: weighing oneself in stones is highly recommended for ego boosting, if one is lacking, that is.